I know this isn’t celebrity gossip … but … this is just some random awesomeness. Who doesn’t enjoy a little awesome entertainment? Take a look at this secret drum corps from Switzerland (or as I like to say it like the guy in Moulin Rouge; Svizervin!).

If you were born in the 80’s or 90’s then I’m sure you were (or still are, thanks to MTV) a fan of Boy Meets World. I’m sure many thoughts ran through your head as a young boy. Well, think no further and take a look!

A new reprise of Boy Meets World will be airing on the Disney Channel called Girl Meets World starring, of course, Danielle Fishel. She posed for the cover of Maxim as a part of promoting the new show. Looking forward to checking it out! The magazine that is … 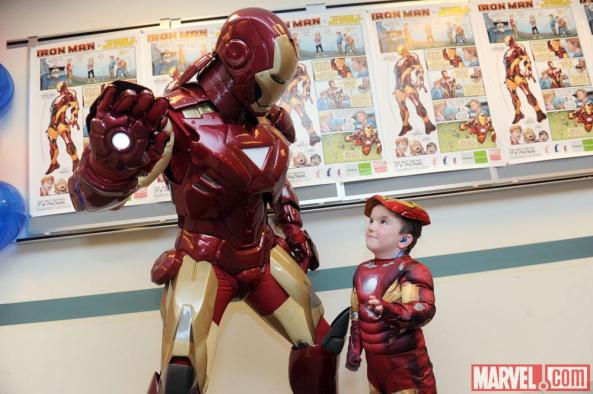 A great new story is coming out where four-year-old hearing-impaired, Anthony Smith, doesn’t want to wear his hearing aids because he says, “superheros don’t need to wear blue hearing aids.” After sharing this with his mom, Christina D’Allesandro, she called Marvel and asked if there was anything they could do. When they heard the story, they went above and beyond her expectations.

ComicsAlliance.com came out with this short piece:

As a person who uses science to both sustain his heart and battle evil, Iron Man is a superhero that knows full well how beneficial technology can be, so it made sense that he’d be the newest hero to team-up with the hearing-impaired super hero Blue Ear, who similarly uses his hearing aid to make the world a better place.

Written by Christos Gage and drawn by Paco Medina, the new poster depicts Iron Man intervening in a bullying incident on Ethan, a hearing-impaired boy. When a group of boys refuse to play soccer with Ethan, Iron Man explains that a hearing aid is just a piece of technology that betters a person’s life, just like his armor.

This changed everything for Anthony, and well, guess who now likes to wear his hearing aids? Check the poster below.

Random cool stories like this will, every once in a while, make its way into the spotlight on Random Humor. Have a similar story? Send us whatever you’ve got!

Error: Twitter did not respond. Please wait a few minutes and refresh this page.

Random Humor is looking for an individual to be apart of its paparazzi team. Photographers and Videographers need to apply. Fill out the form in the contact us link!